button in the drawing toolbar, then you have three different sources types to add the picture. 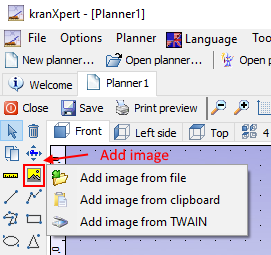 Add image from file
It shows the Windows file dialog and you can select and open the picture file that you want add to the planner.
The supported bitmap file types are jpg, png, bmp and gif and the supported vector formats are emf and wmf.
Add image from clipboard
This is only enabled if a picture is in the Windows clipboard.
You can add a image to the Windows clipboard by:
- Make a screenshot, press the print key on the keyboard.
- Using the 'Snipping Tool' from Windows, after you have create the screen snip click on the copy button to have the picture in the clipboard.
- Using Paint or Paint.net or other image applications and copy the picture to clipboard.

If you want use a Google-Maps picture, start your webbrowser, make the browser full screen, open the Google-Maps page and zoom the view, now use the 'Snipping Tool' or the key print to make a screenshot. Now add the image to kranXpert with the 'Add image from clipboard' tool button.
Add image from TWAIN
Here you can import images from a image scanner or digital camera using the TWAIN interface.
Picture properties
Click on the image in the planner to get the picture properties.

Here you can set:

Length of the image

Height of the image

Diagonal length on the image